Post by Jesse
Morning brought the first hangover of the trip for two of the group. My responsible mother had gone to bed early the previous evening which left all of the late night networking to River Dog, Bob, and me. We shut down the party at the annual Regional Waterkeepers Alliance Conference at approximately 2:00 am so the breakfast bell seemed to toll a bit early for my taste. We ate a hot meal and spoke to Tanya Bonitatibus, the Savannah Riverkeeper; Jason Ulseth, the Chattahoochee Riverkeeper; Bill Stangler, the Congaree Riverkeeper; and many more as we all ate breakfast. Jay Jacobs showed up in time to have a cup of coffee and send us off with more of his abounding positivity. We made our way back down the hill to the river to start the laborious task of packing the boats. Hancock Landing, the location of the conference, sits directly beside the giant cooling towers of Plant Votgle. I theorized that the nuclear power plant next door had provided ambient energy that kept me awake unnaturally late drinking free beer. Every drybag felt like it was full of concrete but I finally managed to shove all of them into their places in my canoe and we were off. 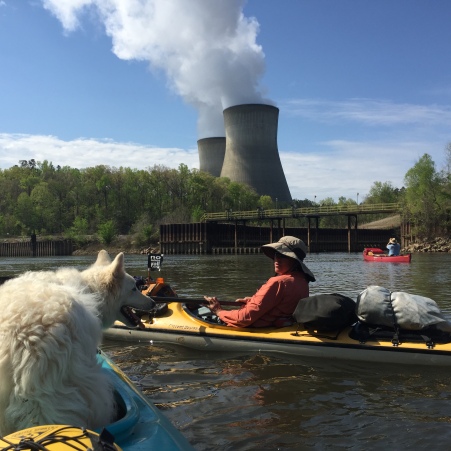 The cooling towers grew in size as we drifted downstream from Hancock Landing until they completely dominated the Georgia skyline. One part of my soul connected with the river water that had been siphoned off and blown into the sky. I expected these feelings of resentment toward humans regarding our need to use rivers as beasts of burden. What I didn’t expect was the silmoltaneous twisted pride that I felt looking at a man made
structure that sucks up river water and spits out clouds. This struggle with duality was short and ended without incident.

We half paddled and half drifted for several hours below the power plant. I was thinking about Marci, my gorgeous girlfriend, who had joined me in my canoe the two previous days. Her quick humor and efficient forward paddle strokes were sorely missed while I struggled into the wind. I spent several miles feeling sorry for myself before I was able to enjoy what I was doing again. Paddling was sporadic and painful through the afternoon, but we managed to get 17  miles downstream to Little Hell Landing where we filled our water containers at an artesian well. The well was a concrete basin built around a vertical metal water pipe with water gushing out of it.  We splashed around in the shallow pool, filled water bottles, and took some pictures before heading downstream to find a campsite.

Dusk was fast approaching when we found the first promising campsite.  Mom (Joanne) was ahead of everyone and encountered a surprise.  She heard some grunts and saw what appeared to be a couple of wild hogs rummaging around just beyond the tree line.  Closer visual inspection revealed a third larger shape.  The first two animals were bear cubs and the third was their momma.  I offered my opinion that this wasn’t an ideal campsite.  One mile downstream we saw another low lying spit of land that looked okay but this time it was in fact occupied by some wild hogs.  We felt fortunate for the exciting nature experience, but discouraged because darkness was hot on our heels.  We pressed on toward White Woman Landing which was marked on our maps several miles downstream.  I have no idea what the origin of this name was or nearby Saucy Boy Point for that matter.  We arrived at our destination 20 minutes before dark.  The light left in the sky was just enough to read all of the No Trespassing signs on all of the trees at the landing.  We discussed risking it, but decided to paddle back upstream a few hundred feet to a sandy area that did not have any signage.  Tents were pitched, a small fire was built and cold turkey sandwiches were enjoyed by all.  We also enjoyed our first aggressive mosquitos at this camp.  A theme that I expect will continue for the rest of the trip.